Showing posts from April, 2015
Show All

MUMBAI, 28 APRIL 2015 – BroadcastAsia2015, recognised as Asia’s top exhibition for the broadcast industry, is slated for 2-5 June 2015 at Marina Bay Sands, Singapore, alongside CommunicAsia and EnterpriseIT. This is the largest and most established trade event for Asia’s broadcast, film and digital media entertainment industry, and is set to feature some of the hottest technologies and solutions for the pro-audio, film and TV. With the proliferation of digital devices and today’s ever-changing market of always-on connectivity, broadcasters are starting to look beyond TV to stream and monetise their content. This year, BroadcastAsia will unveil its new TV Everywhere! Zone, presenting the latest solutions to address increasing consumer expectations, and new challenges the industry has, to provide more convenient and reliable access to content. This exhibition will also cater to the growing demands of many Indian companies participating at the event, to gather insight
Post a Comment
Read more

Mumbai, 29th April 2015:  Doha Bank, one of the largest commercial bank in the State of Qatar, held the inauguration ceremony of its Indian operations on Wednesday, 29 April 2015 in Mumbai. Doha Bank is the first Qatari Bank to establish its full scale banking operations in India. The inauguration ceremony was well attended by several high-profile dignitaries including H.E. Ali Sharif Al Emadi, the Hon’ble Minister of Finance, State of Qatar, H.E. Sheikh Abdullah Bin Saoud Al-Thani, the Governor of Qatar Central Bank and the Hon’ble Shri Suresh Prabhu, Minister of Railways, Government of India.  The inauguration ceremony was also attended by the Indian Ambassador to the State of Qatar Mr Sanjiv Arora, Ambassador of the State of Qatar to India, Mr. Ahmed Ibrahim al Abdullah, Ambassador to India from other GCC countries, Hon’ble Minister of Industries – Government of Maharashtra, Mr. Subhash Desai, Hon’ble Minister of State for Finance and Rural Development, Government
Post a Comment
Read more

"I encouraged him to do whatever he has, you appreciate aficionados My father did and my confidence increased. I am very grateful to you sanvanci really. Know nothing when it came, was a supporter of the arts received a lot of support to all areas. But today many awards on Culture kaladarpana kalagaurava serve chill special award while getting 2015. In the same year the film was completed 50 years of my career in Marathi. When a kalakrala award he never reveals his alone. Many blessed him, and would love to cooperate. The cases in my case. My mother, brother and husband Anil Kale kaimadhava Pandurang Naik joined the erstwhile hope I had the black asi candid confession could not be a rich artist. Celebrating 50 years of my life with the same company kaladarpana culture and I think a lot of possible solutions asalyacahi She said my cahatyansobata. Archana nevarekara Foundation presents the culture of the picture-Drama Awards 2015 kaladarpana glory Rajani kaladarpana culture of the
Post a Comment
Read more 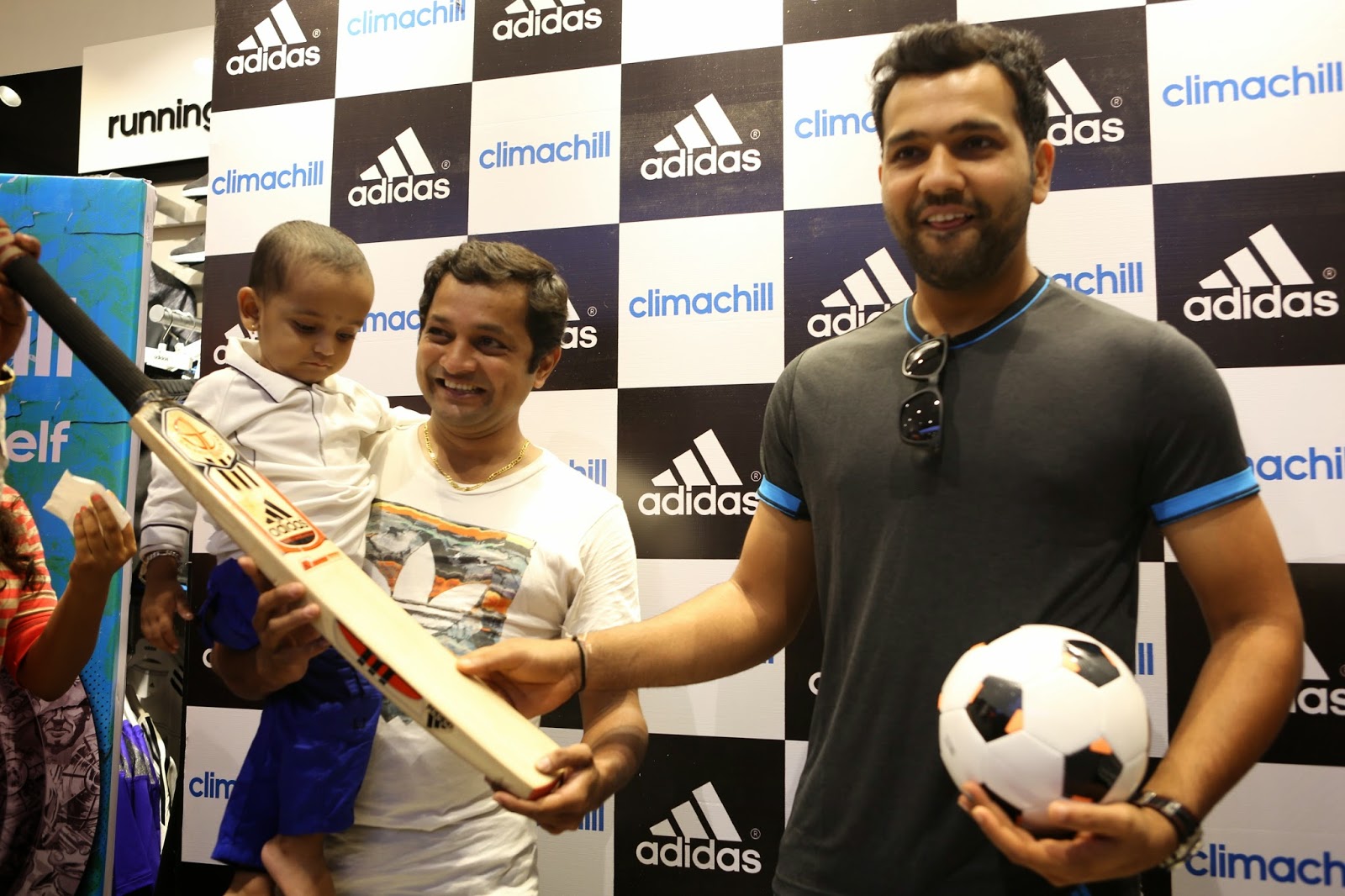 Mumbai, India (April 27, 2015)  – adidas launched the latest edition of its revolutionary training apparel technology- Climachill at the adidas store, in Phoenix Mills today. Sporting the new climachill was adidas athlete and Indian cricketer – Rohit Sharma, who interacted with fans and talked about the edge he gains while training in Climachill. When it comes to performance, every degree matters and the new Climachill product range enables athletes to perform at their best through new age design and material selection for maximum cooling. Speaking at the launch,  Rohit Sharma  said,  “ When it comes to training apparel, one does not expect cutting edge technology that can help push your limits, but Climachill does just that. I have been using climachill for my training sessions, which keeps me cool and gives me the edge to train harder. adidas has always worked closely with athletes to deliver unmatched on-field performance. With Climachill I can surely say that my training
Post a Comment
Read more 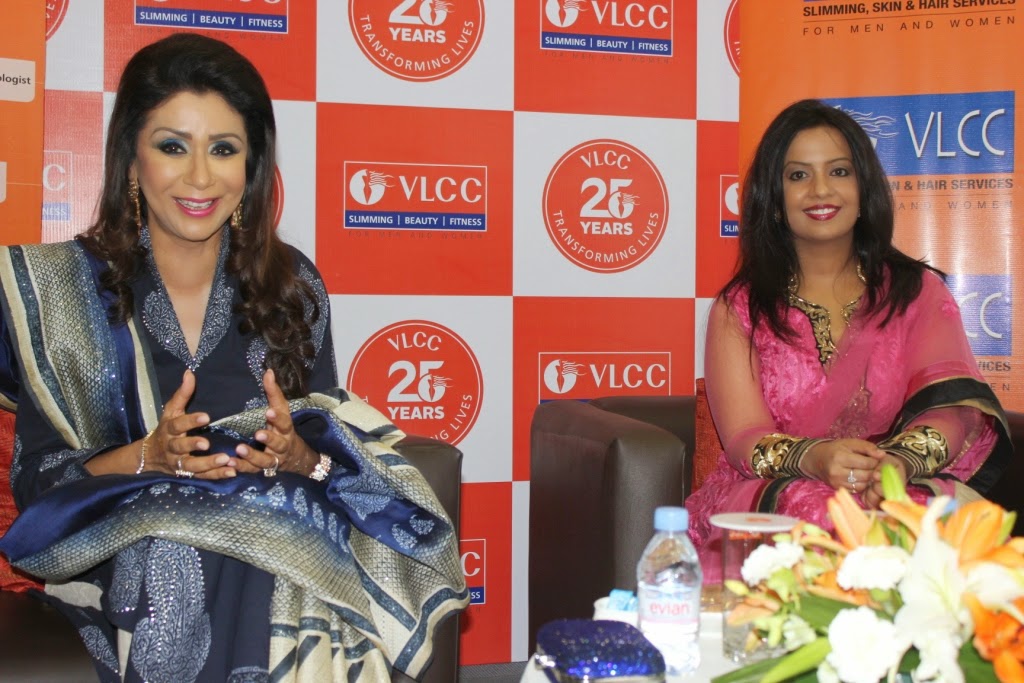 Mumbai, 24 th  April, 2015 : Premier wellness brand, VLCC, today, launched its newest Wellness Center in Bandra that will offer the entire bouquet of beauty, wellness and preventive healthcare services under one roof to enable residents of this iconic Mumbai location to increase their wellness quotient. Mrs. Amruta Fadnavis, wife of the Hon’ble Chief Minister of Maharashtra , formally inaugurated the state-of-the-art VLCC Bandra outlet at a glittering ceremony this afternoon.  VLCC Founder Mrs. Vandana Luthra  was also present on the occasion. Explaining the rationale behind setting up a facility in Bandra,  VLCC Founder Mrs. Vandana Luthra  said: “For VLCC, Mumbai has always occupied a special place in our hearts. The warmth and affection that VLCC has received in Mumbai is something which simply can’t be expressed in words. The Bandra Center is our way of giving back to the city that has been so overwhelming in its response to the VLCC way of life.” “We are hopefu
Post a Comment
Read more

Started by karl Patel and Shanu Makhija, 52 Patiala Chowk  is a famous eating joint withgreat dining experience . Itbridges the gap thats missing in Khar West Patiala Chowk as the name suggest serves typical North indian food which is a hit among the locals and office goers in the vicinity, the restaurant also serves chinese after repeated requests from the residents, what makes them famous is homely food with a dash of spice and tadka. They have a menu that features items that have been carefully chosen keeping in mind the surbabanite';s taste The food is prepared under strict guidance ensuring minimum usage of sunflower oil. Baking soda, artificial colours and preservatives are a big no no. The tandoor items are highly recommended, their Murg Patiala and Murg Matka is a not to be missed and on the biryani front the Special Chiken Patiala amd Murg Matka Biryani served with vegetable raita is a must try. Mushroom Multani, Veg Triple Schezwan, Paneer Kadai,
Post a Comment
Read more

By Alka Swami - April 24, 2015
A wild new restaurant is NOW OPEN in FORT… Great food served in an unbelievable inexpensive price. The “Dazzle” REST-O-LOUNGE RESTAURANT is proud to announce its newest restaurant located in Fort near KalaGhoda, Mumbai. This lovely Pure Vegetarian restaurant is owned by Kuldeep Singh Parmar, Parveen Jain, Jitu Jain & Isha Kazi. The inauguration is done by Mr. Raj Purohit the MLA of Colaba along with the bollywood diva Ms. Sara Loren. The entire event is handled by PEARL Entertainment. Puja Agarwal, the MD of PEARL said "I wish all the very best for this newly opened place. Awaiting to have an amazing cuisine by the chef. Beautiful ambience and a wonderful place for fine dining" We’re friendly With the name like “Dazzle” REST-O-LOUNGE, you’ve probably figured out we are not ordinary restaurant. Known for our great food, attentive service and unbelievable, amazing environment…the “DAZZLE” REST-O-LOUNGE RESTAURANT is favoured by a wide variety of cus
Post a Comment
Read more

Sophisticated details, innate elegance and modern linearity are the creative and stylistic elements that characterize the new Salvatore Ferragamo eyewear spring / summer 2015 collection, making each piece unique and exclusive. MAN SUN SF731S An iconic model of timeless character defined by essential and pure geometric forms, male rigour in the proportions and the typical stylistic codes of the maison. The metal insert in the front highlights the elegance of the acetate structure. The colour palette is defined: black, tortoise and a special antique tortoise effect. SF136SP The carbon fibre aviator structure with polarized lenses and flexible temples is inspired by futuristic and technical elements. Elegance, combined with the research of technical materials, affirms a male, modern aesthetic. An intense colour palette in the shiny variations of black gun, silver and gunmetal with the addition of a gold version. WOMAN SUN SF725S A round acetate shape c
Post a Comment
Read more 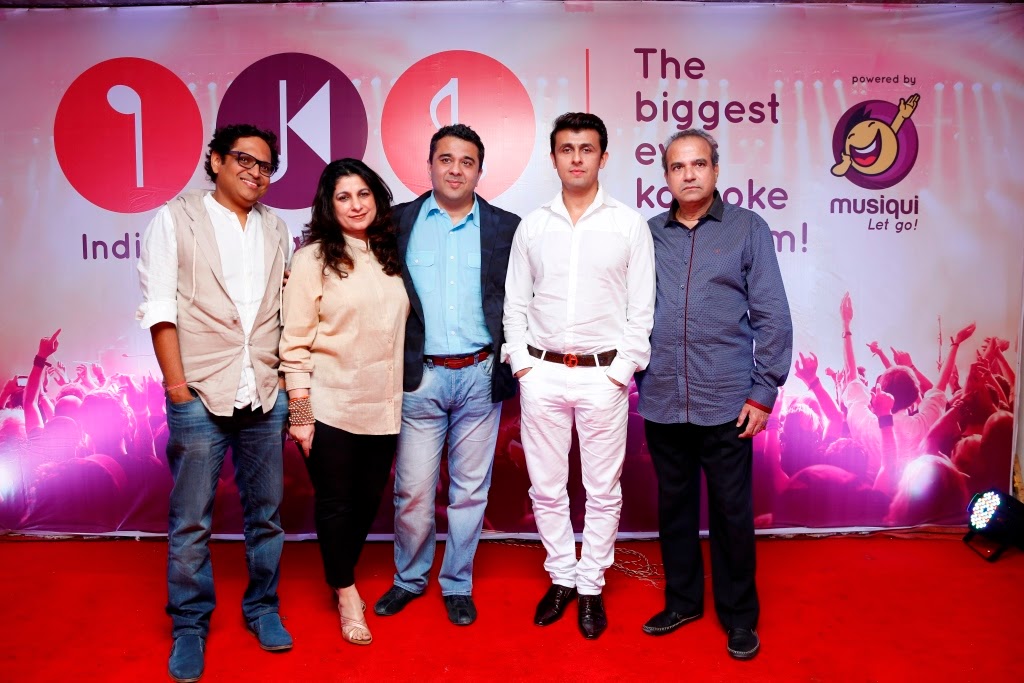 Musiqui App launched the first ever Indian Karaoke League (IKL) at Suresh Wadkar’s Ajivasan Music Academy, Mumbai. If music connects people, then karaoke helps them become ‘buddies’. It’s a fun way of socializing, by putting all your inhibitions aside. And now it’s set to make you famous as well. Musiqui, for the first time in India announced the launch of the biggest platform where anyone and everyone can sing his or her heart out without any restrictions. The app provides license to sing, magic tune the song and make it equivalent to a professional studio recording. These recordings can become the first step towards the stardom and eventually winning the IKL. Indian Karaoke League (IKL) is a nationwide hunt for the best Karaoke singer. For greater levels of participation, the league will be divided into four groups - College Champs, School Stars, Professionals and Amateurs. Contestants can participate in any of these four groups, through the Musiqui app. Pre
Post a Comment
Read more 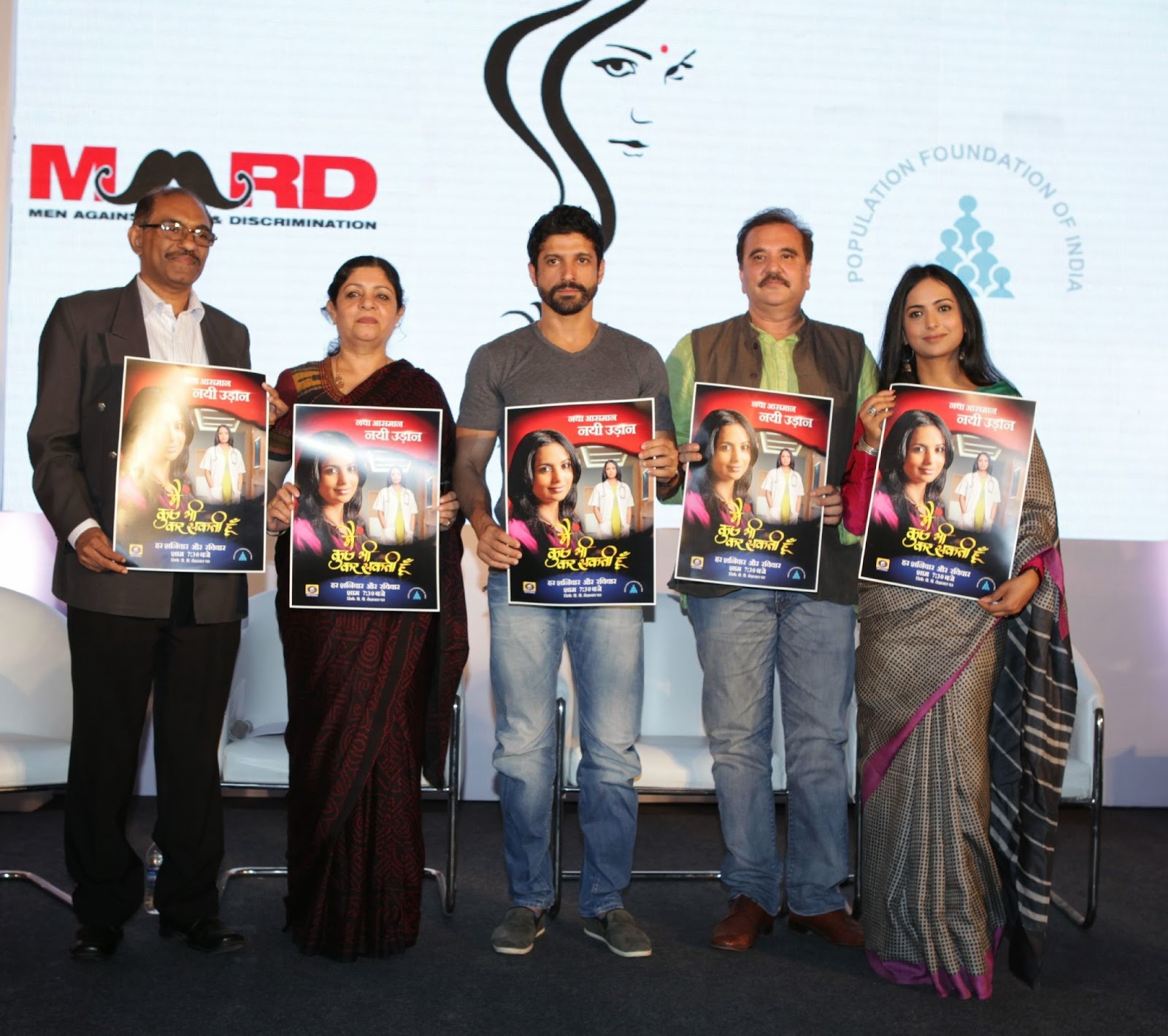 -           The trans media serial that reached out to  58 million viewers in Season One aims to  promote women’s empowerment -           The serial is a joint initiative by Population Foundation of India and Doordarshan MUMBAI, April 16 2015:  In a big push for women ’ s empowerment in the country ,  the founder of the initiative  MARD  ( Men Against Rape and Discrimination),  Farhan Akhtar today extended support to the popular trans media serial,  Main Kuch Bhi Kar Sakti Hoon. “Main Kuch Bhi Kar Sakti Hoon has shown great potential of being a catalyst for change as seen from the feedback the serial has received.  Main Kuch Bhi Kar Sakti Hoon  representing women’s empowerment, and  MARD , representing responsible masculinity, have come together as  Hum Kuch Bhi Kar Sakte Hain  to bring in the change we want to see. Women can achieve anything, they need to have the confidence and belief in themselves and society needs to create an environment of support and safety. Men play a
Post a Comment
Read more 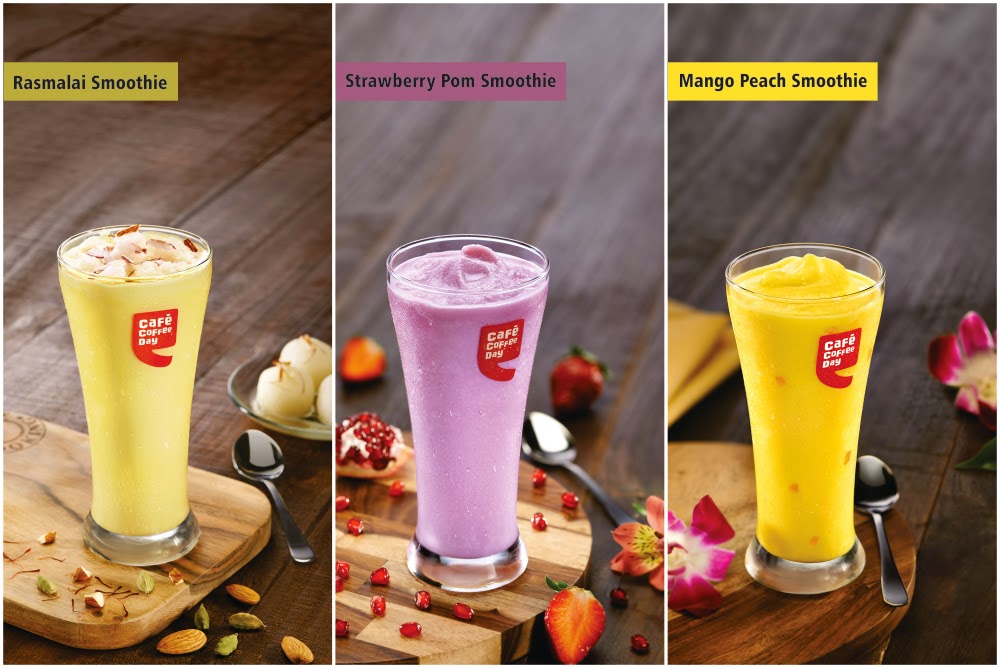 A delicious range of chilled smoothies & slushes bursting with flavours and brimming with taste Mumbai, April 01, 2015 – Summer is back and how! And for the youth, rising temperatures call for slurping on a deliciously cold, refreshing beverage to cool off and simply get reenergized. Keeping with this trend, youth brand Café Coffee Day (CCD) has launched the ultimate summer refresher, ‘Summer Slam’ , a mouth-watering range of chilled smoothies and slushes bursting with unique fun flavours and brimming with taste that will invigorate its young patrons like no other.  The smoothies are a range of a divine creamy concoction with bite size pieces of the key ingredient immersed in it that will leave one slurping and snacking all at once. Rasmalai Smoothie is the royal Indian mithai re-imagined as a rich, creamy beverage. It carries almond flavours with the very prominent bite of a rasgulla. The Strawberry Pomegranate Smoothie is a delicious cool creamy mix of strawberry and
Post a Comment
Read more 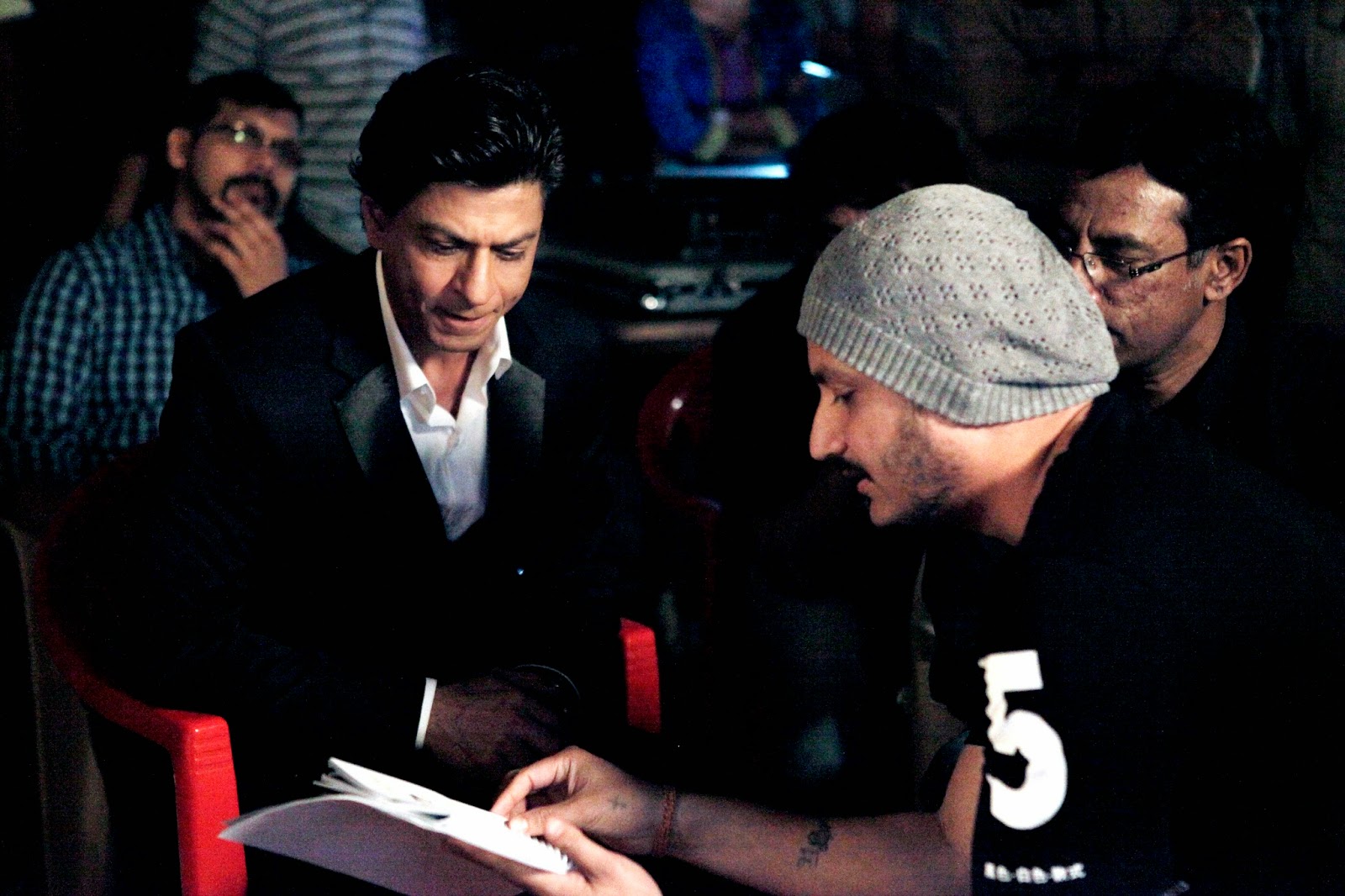