Will robots take over humans? Will you be able to directly download food using apps? Will there be flying cars? Will families choose maids or it will be the other way round? Will body parts be replaced with technology? Will humans be equipped with superpowers?

Each one of us, at some point of time, has thought about how the world will be in the future. Giving a sneak peek into a life decade from now, Sony Entertainment Television brings a light-hearted futuristic comic caper –2025 Jaane Kya Hoga Aagey! Produced by Optimystix Entertainment, the show will explore the lifestyle and daily struggles of human beings overpowered by technology in the most humorous way which is sure to bring a smile on the viewers’ faces.

Launching 31st August, 2015, it will air Monday to Friday at 9:30 pm only on Sony Entertainment Television.
Set in 2025, the show revolves around Joshi family based in Mumbai and each member of the family is eccentric and this is what makes it a mad house. Naisha (Sanyukta Timsina), the daughter of the family, is a computer genius. After her mother Ganga’s (Lubna Salim) untimely demise, her father Inder (Sunil Barve) misses her terribly. 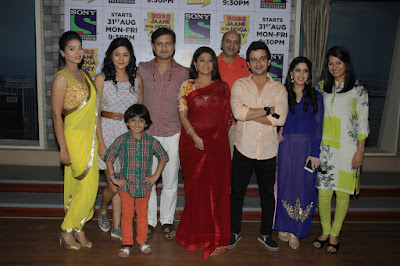 The entire Joshi family is not able to get over her death so Naisha decides to bring an end to their misery. She uses technology to bring her back to life by creating a 3D hologram of her mother. With the technological rebirth of Ganga, the family struggles to deal with the sudden changes that life has to offer.

Adding the fun quotient is the eldest member of the family, Dadaji (Kenny Desai) who is the youngest at heart. He is completely techno-savvy and is often seen replacing his old body parts with new ones. Naisha’s brother, Naveen (Akhlaque Khan) often referred to as Nano, is crazy about nano technology. His obsession leads him to invent an additional hand which does all his chores.

Adding spice is the maid, Monica (Clair Monica), who prefers the term ‘Domestic Help’ and comes with a high price tag, lots of attitude and never ending demands. As age is no bar, each member will unapologetically display their quirks in the most nonchalant manner which will have the audience in splits.

2025 Jaane Kya Hoga Aagey will bring the perfect combination of relationships, emotions and technology!
So get ready for a journey into the future with the Joshis, starting 31st August,at 9:30 pm only on Sony Entertainment Television.