By Alka Swami October 18, 2016
-          Email address in Marathi, Gujarati, Hindi and more other languages
-          Initiative to reaching the large sizeable population which lies outside the ambit of the digital connect
-          Transforming digitalisation to the non-english speaking population under Digital India Mission and Make in India Mission
-          India is one of the contries having language diversity in the world
18th October, 2016, Mumbai: One of India’s largest IT services organisation, DATA XGen Technologies Pvt Ltd a group company of Data Infosys has launched world’s first free linguistic email address under the name ‘DATAMAIL’ which allows to create email ids in 8 Indian launguages, English; and 3 foreign languages – Arabic,  Russian and chinese. Over the period of time the email service in 22 languages will be offered by Data XGen Technologies Pvt. Ltd. which is free to be downloaded from any android or IOS system through their respective play store under the name DATAMAIL. 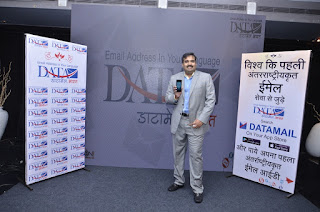 Speaking at the launch of  the world’s first linguaistic free email service, Dr. Ajay Data, Founder and CEO Data XGen Technologies Pvt. Ltd said, “Indian languages account for less than 0.1% content on world wide web or www (as per IAMAI report). Also over 89% population is a non –English speaking population which is unable to read and communicate via email as the language utilised to communicate is English on the world wide web. In order to contribute towards the Digital India Mission and Make in India mission, we at Data XGen Technologies Pvt. Ltd., launched the first free ‘indic’ email service under the name ‘DATAMAIL’. The linguitic email service will allow people from across India to communicate in 8 regional and one English languages to provide ease of connect and bridging the digital devide amongst Indian citizens.”

As per the global internet report, India stands at a 139th position in case of its internet penetration while it stands as one of the countries having largest language diversity in the world.  This gives a clear picture that India should look for digitalisation in line with the language diversity to increase the penetration. Internet penetration in Iceland  which is on1st position, UAE on 12th, USA on 18th, Germany on 19th where the language diversity is comparatively very low. In case of affordability of mobile broadband percentage, India is on the 101st position with 12.39% of average GDP per capita is required for mobile broadband access which is further expected to be corrected with the reforms and competition in the telecom industry.

Further Dr. Ajay Data says, “With 220mn users, India is now world’s second-biggest smartphone market which is further expected to grow very fast. Now with the connectivity of internet, Indian population has become digitally equipped but there are other factors that require to be taken into the consideration for achieving greater digital and mobile connectivity. The issue of language is extremely critical, which remains largely unaddressed and therefore DATAMAIL can break this clutter and lead the Digital India dream.”

Digital India without touching 89% of population has no mean and Government and Private sectors should work together to avail the user-friendly digital technology to the Semi-Urban and Rural India for fulfilling PM’s vision of Digital India.

Some Examples of Email IDs:

By Alka Swami February 12, 2018
·           Five new luxury watches  - Alpine Neo, Vector,  Crusader, Aquatica and Latitude launched in India under Chairos brand ·           Price range of the new collection is from Rs 62,000 to Rs 1,00,000 New Delhi, February 12  2018 :   Leading Asian direct selling company QNet has launched five new models under its luxury watch brand - Chairos. The Chairos brand is QNet’s proprietary range of luxury and sports watches exclusively for India. The new Chairos watches have been designed to combine form and functionality with timeless elegance and style. Commenting on the launch of the new range of watches, Trevor Kuna, Global CEO of QNet said, “Men typically don’t have many options for accessories to splurge on and watches have been known to convey a subtle message about the wearer’s personality. India is a fast growing global economy and more men are turning to active lifestyles, travel and exploring new experiences. Chairos is our flagship brand in India and we want
68 comments
Read more

By Alka Swami September 17, 2016
Mumbai, 16 th  September 2016: A team comprising four students, two each from Manipal Institute of Technology (MIT) and Kasturba Medical College (KMC), won the first prize in Hackabout 2016 and a cash award of Rs one lakh in the competition to design and prototype a solution to identified medical problems. The competition was organized by Philips and Manipal University for students of KMC and MIT. The runners-up were a team of four from MIT. They walked away with a purse of Rs 75,000.  The prize distribution function was held at the MIT Library Auditorium on Monday. The winning team comprised Shikhar Srivastava and Reuben John of MIT and Sidharth R and Siddharth Pratap Nene of KMC. The team worked on the theme, “Evaluation of Causative Factors for amlodipine induced pedal edema”.  The runners-up team consisted of; Abhishek Karan, Elvis Louis D’Souza, Shreyas Hebbar, Malvika Sandhu and Raghav Chawla. Their theme was, “Role of metabolic obesity and BMI in patients with coronary art
2 comments
Read more