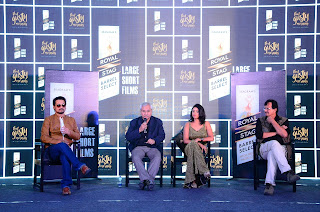 Themed on the objective of “keep perfecting”, The Royal Stag Barrel Select Large Short Films is a platform for aspiring directors to feature along with mainstream Bollywood directors while still chasing their creative energy to create a niche for themselves in the industry. The platform gives a credible stage to the storytellers to showcase their artistic creativity and reach out to their target audience through the online world.
Commenting on the release, Raja Banerji, Assistant Vice President, Marketing, Pernod Ricard India, said “Royal Stag Barrel Select Large Short Films is extremely happy to present Jahnu Barua’s ‘That Gusty Morning.’  Director’s like Mr. Jahnu Barua will enhance the credibility of the platform and also encourage and motivate the young and talented directors we present these short films to the audience. Resonating with the core philosophy of Royal Stag Barrel Select, the platform is meant to help them keep perfecting their skills and establish themselves among the tribe. It is indeed a matter of pride for us that the short film industry in India is evolving and we are at the helm of this evolution.”
‘That Gusty Morning’, starring Seema Biswas, Kopil Bora, Urmila Mahanta and Arun Nath is a peek into the life of a young girl whose mother is suffering with Alzheimer’s and how she has restricted herself from exploring a career away from home since she is the only daughter and needs to look after her mother. Her mother’s illness hampers her personal life because of which she completely detaches herself from the idea of love. Scarred with past experiences, she is hesitant to introduce him to her parents. Amidst such distress and frustration, a miracle happens which changes her life and that is where the story also take a turn!
Talking about the film, director, Jahnu Barua said, “That Gusty Morning explores the life of a young girl shackled in a sea of responsibilities and a tempest of her emotions. I approached the story with an emotional outlook and the characters have been played really well by the immensely talented actors who are a part of this film. As a filmmaker it is very important to be able to showcase your work freely and I believe Royal Stag Barrel Select Large Short Films is a great platform that lets you be as creative as possible.”