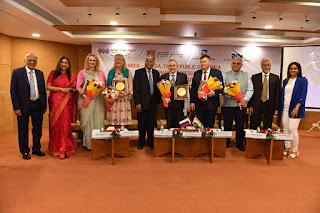 “Since last few years, Republic of Crimea has made tremendous economic and social development with investments from the Russian Federation. Crimea is one the Russian largest tourist hubs. The rapid infrastructure growth with social and economic development and the establishment of the innovative and investment-attractive economy has enabled the peninsular region of Crimea to become an important growth region of Russia. Its strategic location in the black sea can help India to accelerate bilateral trade with Russia, “ said Mr. Georgy Muradov - Deputy Chairman of the Council of Ministers of the Republic of Crimea - Permanent Representative of the Republic of Crimea to the President of the Russian Federation in a Keynote Address at an interactive programme on ‘Doing Business with Republic of Crimea, Russia Federation’ organised jointly by MVIRDC World Trade Center Mumbai and All India Association of Industries in association with Consulate General of Russia in Mumbai and Southern Regional Export Support at WTC Mumbai.

Chief Guest, Ms. Irina Kiviko - Deputy Chairman of the Council of Ministers - Minister of Finance of the Republic of Crimea presented key economic facts of Crimea. She said, “In 2018, Crimea attracted an investment of USD 290 billion. The Government of Crimea is committed to attract investments in Crimea and is offering multiple incentives. These include huge land tax and income tax benefits. Additionally, the thrust on Start-Ups and SMEs have helped the economy to grow rapidly. In last 5 years, more than 1200 investors have been registered in Crimea and have invested over USD 300 billion.” She invited Indian businesses to establish their business operations in the Free Economic Zone to take advantage of Crimea’s progressive economic policies.

Ms. Natalia Serova, Director of Southern Regional Export Support presented the role of her agency in promoting commodities and services in international market as well as promoting Crimea as the favourable economic and geographical location to attract investment. She said, “One of the competitive advantages of the Republic of Crimea is a high level of diversification of the economy, which is widely represented by industry, agriculture and services. The tourism industry as a whole makes a significant contribution to our economy. The establishment of 3 Indian tourist-friendly hotels is an important step to boost tourism from India. In addition to this, our Government provides special incentives to women entrepreneurs.” She said apart from tourism the Government of Crimea has put a special thrust on pharmaceutical, heavy industries and logistics sectors.

Earlier, Mr. Aleksei Vladimirovich Surovtsev - Consul General of Russian Federation in Mumbai in his opening remarks said, “Located on the northern coast of the Black Sea, Crimea has strong historical and cultural ties with Russia. Several Great Russian authors including Tolstoy and Pushkin described Crimea as the heaven. Republic of Crimea’s focus on tourism, bollywood, water supply and education in addition to the evergreen bollywood holds key to enhance bilateral trade between Russia and India.”

Mr. Vijay Kalantri, Vice Chairman, MVIRDC, World Trade Center Mumbai in is welcome address said, “India and Russia shares great history and tradition of modern times. The present bilateral trade at approx. USD 11 billion do not represent the potential that we possess. In next 3 years, both countries have potential to step up the bilateral trade to USD 25 billion. Natural resources, minerals, tourism, bollywood, specialised manufacturing and petro-chemicals hold the key to help both countries to achieve this target. Republic of Crimea with its strategic location in Black Sea will play an important role to achieve this target.” Crimea with its picturesque location and tourists attractions should promote bollywood film shooting. He urged Hon’ble Minister and the Government of Crimea to offer tax incentives and special packages to promote Indian film shoots in Crimea. “Bollywwod has a strong history of promoting a country to the global tourists’ destination. Switzerland, Spain and Poland are some of countries that have benefitted from this. It’s time that Crimea should invite Bollywood to its country,” he added.

On this occasion, the participating business delegation leaders from Crimea made presentations on various cooperation and collaboration opportunities in tourism, essential oil, education, mineral water and non-alcohol beverages to Indian delegates.

Ms. Rupa Naik, Senior Director, MVIRDC Wold Trade Center Mumbai proposed the Vote of Thanks. She thanked the visiting delegation, Southern Regional Export Support and the Consul general of Russia for organising this delegation to visit Mumbai and said, “WTC Mumbai and AIAI have unique relations with Russia. Since past several years, both organisations have been promoting bilateral trade between both countries. This high-level government and business delegation from Crimea will open new avenues of international trade development for Indian companies and we look forward to partner with Russian Government in accelerating this further.”

The interactive meeting was well attended by representatives of trade and industry, government authorities and members of the media.