Posted by Alka Swami on February 13, 2020
The theme for the 3rd edition was Architectural Gems to target 2021 buying season
The Artisan Awards 2020 presented 27 winners in Art-Deco, Neo-Futurism & Islamic Arabesque categories and the Best Product Inventory 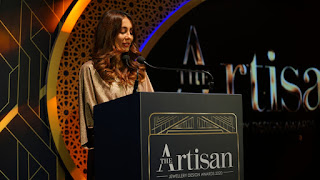 The purpose of The Artisan Awards is to inspire India's jewellery designers to push their design boundaries and demonstrate their skill by showcasing world-class pieces! The theme for this year’s The Artisan Jewellery Design Awards 2020 powered by GIA (Gemological Institute of America) was Architectural Gems under which there were different categories namely Art-Deco, Neo Futurism and Islamic Arabesque categories. There was a special category for the Best Product Inventory at IIJS Signature 2020. The winner for the Art-Deco category Harjas Kaur; the winner for Neo futurism was Namrata Bhardwaj; and the winner for Islamic Arabesque category was Koushik Mondal. The Awards were given away by Mr. Stephen Webster, Mr. Pramod Kumar Agrawal (Chairman, GJEPC), Mr. Colin Shah (Vice Chairman, GJEPC), Mr. Milan Chokshi (Member-COA & Convener, Promotions, Marketing and Business Development of the GJEPC) and Mrs. Nirupa Bhatt (MD - GIA, India & Middle East).


Mr. Pramod Kumar Agrawal, Chairman, GJEPC, said, “India has extremely talented pool of jewellery designers. Artisan awards is one of its kind initiatives of GJEPC to felicitate the best talent in jewellery design. The objective of organizing Artisan Awards is to encourage and motivate our students and designers to reach their full potential and make it big in this industry. I congratulate all the designers behind crafting such beautiful designs and the manufacturers who brought these designs to life. Looking at these exquisite jewellery pieces, I can say that the future of this industry is in safe hands.”

Internationally acclaimed jewellery designer Mr. Stephen Webster said, “For a piece of jewellery materials are everything. Materials and craft form the basis, but the element of design pushes things further. Design competitions are important because they challenge you to push yourself creatively, to push your own boundaries. India is steeped in tradition and India has influenced nearly all jewellery designers. I congratulate all the winners of The Artisan Awards presented by GJEPC and can say we have seen some great pieces.” 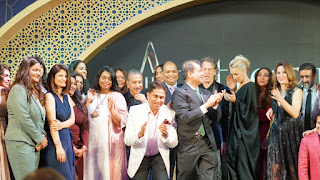 Mr. Colin Shah, Vice Chairman, GJEPC, said, “India’s craftsmen are amongst the best in the world in terms of skills and abilities to manufacture beautiful handmade jewellery. We can only sustain when we give attention in creating value addition for our products and focussing on design. One amongst the various initiatives that GJEPC has undertaken is The Artisan Awards. In this 3rd year, we have fairly good representation from different parts of the country - each one has their unique contemplation. Through this platform, we tapped talent not only has the vision to create designs that push the boundaries of creativity but also imbibe factors that give jewellery 360-degree touch to be accessible to the end user.”

Mr. Milan Chokshi, Member-COA & Convener, Promotions, Marketing and Business Development of the GJEPC, said, “The kind of designs we saw through this process have been truly amazing. The eminent jury had a real tough task in selecting the finalists and winners. And the support that the manufacturers gave these young designers was heartening to see. This year’s theme “Architectural Gems” has been devised to inspire designers to use a nonlinear approach to create jewellery, inspired by 3 distinct eras of architecture. I congratulate all 625 participants for their inspiring interpretations of the theme. The future is bright and shiny.”
As the name suggests, this theme marries the two worlds of Architecture and Jewellery, highlighting their similar tenets of function and design. There is grandeur in their attitude, timelessness in their appeal and immense inspiration stemming from their style. We’ve all caught ourselves marvelling over the interior design of a coveted house or gushing over the beauty of an exquisite diamond necklace.  What is it that overlaps between these aesthetic worlds? If you compare the two, you find that they both follow key principles of durability, utility and beauty. So it’s not surprising that the same keywords are associated with both arts: shape, structure, quality, line, flow, pattern and precision.

Back in the day, Art Deco represented luxury, glamour, exuberance and faith in social and technological progress. The concept of Art Deco was not just a single style, but a pastiche of different and sometimes contradictory ones. Yet, they were all united by a desire to be modern. Some of the defining designs are the streamlined geometric symmetry, sweeping curves and Chevron patterns.

Neo-futurism is an early-21st century architectural style, which evolved out of high-tech architecture. It is a concept that incorporates urban design that is in touch with human emotions, ethical values and sustainability. It suspends old notions of function and possibility and showcases dynamic forms and lines, and sometimes, even a reckless simplicity. Some of its defining qualities are its fluidity in style, its experimental nature and avante garde form.

Islamic Arabesque: The Arabesque developed out of early traditions of plant based scroll ornament in the cultures taken over by the early Islamic conquests. It is often used to symbolize the transcendent, indivisible and the infinity in nature. Some of its defining designs are rhythmic linear patterns, plants and vines all rotating in perfect symmetry, sometimes enhanced by calligraphy.