The disinvestment proceeds should be utilised towards funding infrastructure projects, and not just bridging the fiscal gap, say experts

Posted by Alka Swami on February 05, 2020
“Union Budget 2020-21 is positive for medium to long term but not for the short term.  The way to revive growth is through fiscal policies since monetary policy is tied down by rising inflation. We are witnessing demand deficiency after a long time. Sectors such as auto, NBFC, power, real estate and telecom are struggling. On the positive side, higher allocation for green revolution such as contract farming, land leasing and reforms in APMC are praiseworthy. On the other hand implementation of National Logistics Policy and Education policy will be difficult owing to coordination required with states. The Finance Minister has made an attempt to woo foreign capital as raising revenues for domestic sources are limited. The budget depicts a slight counter intuitive move of raising tariffs. The government is promoting ‘Assemble in India’ to support ‘Make in India’ which is working well in sectors such as smart phones. The government wants to replicate this success in other sectors as well,” said Dr. Sachchidanand Shukla, Chief Economist, Mahindra Group at a panel Discussion on ‘Implications of union Budget 2020-21’. The Panel discussion was organised jointly by MVIRDC World Trade Center Mumbai and All India Association of Industries at WTC Mumbai. 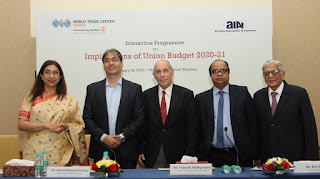 Dr. Shukla while presenting a macro-economic view of the economy said that Between FY 12 and FY 19, the government fell short of revenues. Therefore, expenditure as a percentage of GDP fell by 4%. With monetary policy targeting inflation and fiscal policy also locked, we cannot achieve growth. The Government is looking at meeting a short fall of INR 3 trillion in revenue in next 2 months. If this target is not achieved, it will affect the expenditure by INR 1.2 trillion. The Government expects divestment proceeds to the tune of INR 2.1 trillion in FY21, of which INR 1.5 trillion seems achievable with the help of LIC, Air India and BPCL divestment. However, this huge target along with non-tax revenue receipts pegged at INR 4 trillion appears over ambitious. He also suggested that the disinvestment proceeds should be utilised towards funding infrastructure projects, and not just bridging the fiscal gap.

Mr. M. S. Mani, Partner, Deloitte India presented the views on Indirect Taxes provisions in the union budget. He said, “Since last 10 years, Government has made efforts to bring down the Customs tariff on various items. However this year, it seems that there is a conscious effort to raise customs tariff on certain products to restrict imports and promote ‘Make in India’. The products where customs duty is raised are the ones where Indian companies have self sufficiency. It seems that the efforts are to tax products that are not of national interest. The focus on tightening of ‘Rules of Origin’ is important, considering widespread instances of misuse of FTAs by certain countries. The introduction of new Health cess to promote Make in india in certain healthcare products should encourage their manufacturing and help in strengthening India’s position in pharma and healthcare sectors in international trade.”

Mr. Firoze Andhyarujina, Senior Counsel, Supreme Court presented his views on various direct tax related issues addressed in the budget. He said, “This Union Budget is laying a definitive road map for the future. As regards to policies for agriculture sector, environment, economic issues, education and upliftment of the poor the budget is in the right direction. However as regards to income tax provisions, the budget is fraught with complications. Introduction of a choice-based income tax regime will make it complicated especially for employers to calculate tax liabilities of employees and thereby applying TDS. Abolition of DDT (dividend distribution tax) will create difficulties for individuals. Further there are no benefits for senior citizens and women. If perquisites exceed INR 7.5 lakhs, the excess will be taxed. This can be termed as ‘Upper Middle Class Tax’. Multiple instances of TCS, i.e. tax collected at source at 5% will further make individuals and corporate shelling out more tax.” He also pointed that since past few years, Government is focussing on encouraging NRI remittance and inward investments. However the introduction of ‘Deemed Indian Resident’ will tax the NRIs and may discourage investments from them. Mr. Andhyarujina was very vocal about Government’s efforts in curbing the powers of IT Appellate Tribunal and said that such Tribunals are important for governance.