Neha Rajpal Productions climbing every step higher and is all set for recording songs for her upcoming movie. Since few days Neha Rajpalhas been in news for her upcoming movie through various reasons. Neha has gathered huge tale0nt pool for her first movie. Vijay Maurya andYogesh Joshi are roped in to write the screenplay and dialogues of the movie. Both writers are highly acclaimed and award winning writers making it truly a winning script. Yogesh Joshi is a highly acclaimed writer for the films like Mumbai Meri Jaan and Tendulkar Out whereas Vijay Maurya has received national award for writing fun film Chillar Party. 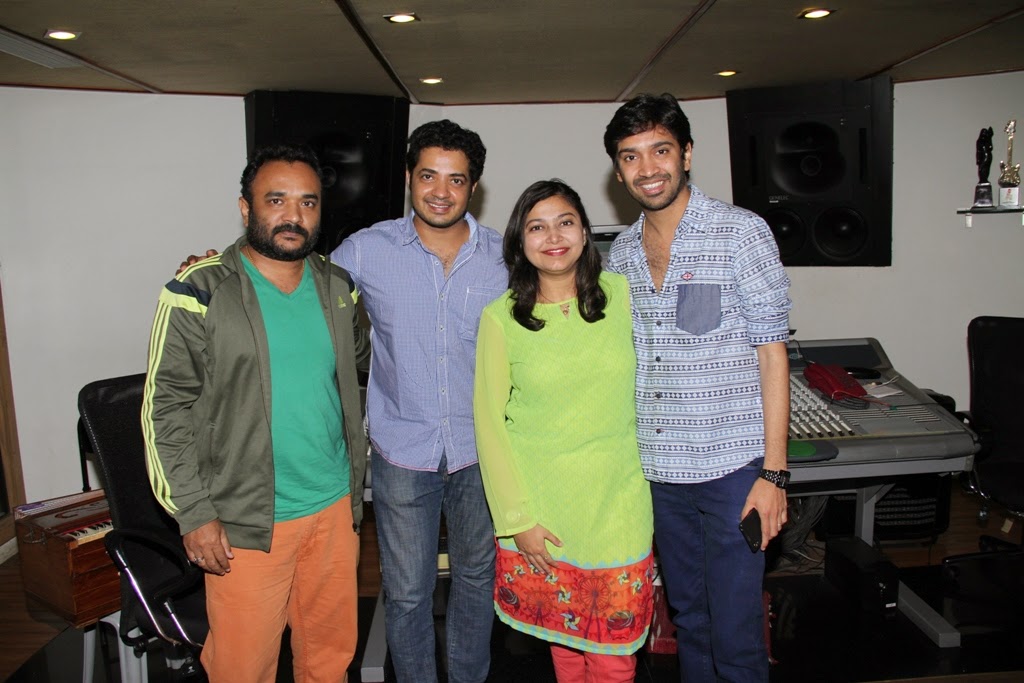 The movie revolves around identical twin sisters falling in love with the same boy and how the fun comedy and romance grows in the back drop of a college life. The first romantic track of the movie “Tu Jithe Me tithe…” recorded at Ajivasan Studio, Juhu is written by Ashwini Shende on the soothing music of Nilesh Moharir. The duo are once again seen together after “Saavar Re…”.  The duet romantic track is sung by magnificent singer Swapnil Bandodkar and Neha Rajpal herself.

On this occasion Music Director Nilesh Moharir said, “The Rajpals are a creative duo and I have known them for years now. They have frequently expressed their appreciation for my work and when they approached me to compose a love anthem for their ambitious movie I was more than happy to work out a beautiful melody. Like every producer they too wanted a winner of a song but then they also wanted the creation to have classic qualities, a signature composition which will be lasting forever. It's the prime love-theme of the lead characters in the movie. I had a lot of pressure to deliver my best. But I was given the required time space and luxury and most importantly the creative inputs by Aakash and very talented Vijay. It's been a great experience working with NRP for this mammoth project.” With a laugh Nilesh added, “I hope my listeners enjoy this melody. They just might make it the song of the year!.”

The fun loving romantic comedy story is written by Dr Akash Rajpal and Omkar Mangesh Datta. Rohan Mapuskar is the casting director of the film who shortlisted key characters of the movie through a unique campaign of Whatsapp actors’ talent hunt in search of new fresh faces. After casting for blockbusters like 3Idiots, Munna Bhai series and PK, this movie will be Rohan’s first marathi film as a casting director. One of the most important role is being played by veteran actress Vandana Gupte. The Captain of the ship (director) will be writer himself, Vijay Maurya as he is already a well known director in Ad world.

The music of the movie has already started to catch the attention and the curiosity continues to grow on who are the lead faces?? Each one in the industry as well as audience is looking closely on the development of this marathi film.