PUMA AND MUMBAI CITY FC ANNOUNCE THEIR ASSOCIATION FOR ISL

Posted by Alka Swami on August 29, 2015
PUMA has associated with Mumbai City FC as the official kit sponsors for two seasons in the ISL
Mumbai, August 22nd 2015: PUMA launched the much-anticipated new Mumbai City FC home kit for the 2015 ISL season. The kit was launched on Saturday in Mumbai at Tote on Turf in Mahalakshmi
The club’s trademark blue received a slick makeover and was revealed at a special launch event. Led by actor & club co-owner Ranbir Kapoor, team members Sunil Chettri, Andre Moritz, Subrata Pal & Subhash Singh walked on stage to unveil the new kit. The shirt features lightweight fabrication with dry cell for moisture management and a mechanical stretch fabric, to ensure ease of movement along with ergonomically placed mesh inserts for increased breathability.
With football being a focus for the brand, PUMA is already associated with the ISL as the official ball and boot sponsor and are now further strengthening their presence in India's most popular football league through their association with Mumbai City FC. With players such as Chettri, Moritz, Pal & Singh in the team, Mumbai City FC is all geared up for a successful ISL season. 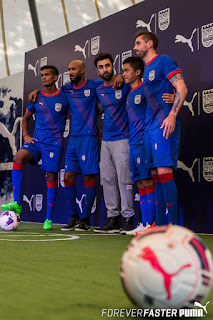 Talking about the new association, MD- PUMA India, Mr. Abhishek Ganguly said- “This is a major partnership for PUMA as Mumbai represents India's largest football market. This association allows us to connect with our large customer base in the city where we have a strong retail presence. As a city Mumbai’s DNA aligns with PUMA’s key characteristics of being brave, youthful and energetic, and together we hope to make the on-field footballing action with Mumbai an even more exciting proposition for the audience."
When asked about the association with PUMA and the new kit design, Ranbir Kapoor said - “This year is extremely important for us. We are doing our best to ensure this season is a success, but the club needs all the support it can get. I am thrilled that Mumbai City FC is partnering with a strong performance brand like PUMA who can help us achieve our goals for the season."
Mumbai plays host to a large audience for the sports and fans can grab their own Mumbai City FC home replica shirt which will be available for purchase at PUMA stores across Mumbai from October, 2015.