By Alka Swami - November 25, 2016
Mumbai, November 25, 2015: It was a day filled with joy for 250 kids from various slums, as Khel Khel Mein, an initiative for underprivileged children by Wockhardt Foundation, celebrated their annual day – Umang in Mumbai. Children got a chance to meet the youngest winner of the Prestigious Dadasaheb Phalke Academy Award- Ms. Amrita Rao. 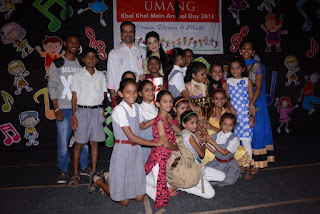 As part of the celebrations, about 250 underprivileged children in the age group of 6 to 12 years from across 15 Khel Khel Mein centers in Mumbai put up various performances including dance shows, skits, singing, musical dramas, etc. The performances were judged by Nandan Khale, who represents the IB Asia Pacific as an official Consultant to IB schools, Salome Roy Kapur, a dancer and choreographer of movies including Bobby, Umang and Kasauti and Vijay Lazarus, President of the Indian Music Industry (IMI). The event thus motivated and acknowledged talents of the underprivileged children with proper guidance from the judging team.
Having no bounds to the enthusiasm Ms Amrita Rao said, “I am delighted to be a part of Umang. It fills my heart to see such amazing talent and enthusiasm in these kids. They are not underprivileged, they are gifted. I appreciate the spectacular work of the entire team of Khel Khel Mein for bringing such happiness through education in their lives.”
Ms. Samina Khorakiwala, CEO - Khel Khel Mein, said “Khel Khel Mein aims for a child’s physical, psychological and social well-being through fun and learning. It feels proud to see these children learn and spread the seven peace human values through fun and play –Gratitude, Forgiveness, Love, Humility, Giving, Patience and Truth. We will continue doing our best towards the blooming future of our society.”
Khel Khel Mein – an initiative by Wockhardt Foundation is run under the aegis of Ms. Samina Khorakiwala, CEO – Khel Khel Mein.  These centres are essentially toy libraries where underprivileged children engage in edu-recreational play within a semi-structured programme based on sound values.
The teachers were recognized and awarded for several categories such as - outstanding teachers, creative teachers, pro-active teachers for their noble contribution towards development of underprivileged children through the year. The football trainer and the choreographer were also felicitated by the Chief Guests.
Khel Khel Mein today runs 26 Edu Recreational Centres and toy libraries for the underprivileged children in the slums of Mumbai (15 toy libraries), Delhi NCR (4 toy libraries) and Aurangabad (7 toy libraries)