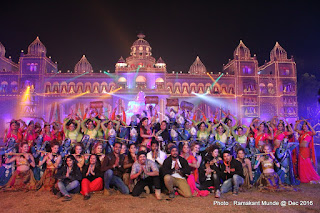 This romantic number was sequenced in a festival where all dancers were dressed in colorful lehnga cholis, with sticks in their hand, specially Daisy was glittering like a fairy, it was shot in four days, but both Daisy and Rishi were so energetic that they enjoyed the entire shoot in jolly mood. Rishi could not control his energy and in last lap he slipped and got his right leg fractured. Now only one song is balance to shoot, and film will be completed.