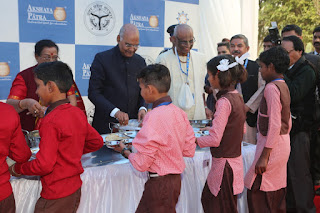 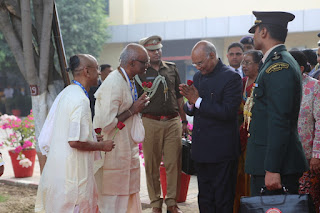 At the Foundation’s centralised kitchen, the Hon’ble President and other dignitaries were given a guided tour of the facility. Shri Madhu Pandit Dasa familiarized them with the kitchen equipment and processes involved. After the kitchen tour, he served mid-day meals to the children from Government schools and happily interacted with them. He also appreciated Akshaya Patra’s Mid-Day Meal Programme.

Shri. Madhu Pandit Dasa expressed his happiness about the Hon’ble President visiting the Foundation’s kitchen in Vrindavan and serving mid-day meals to the beneficiary children. Shri. Chanchalapathi Dasa said that the Vrindavan kitchen was the second centralised kitchen to be set up by Akshaya Patra and thanked the President for interacting with the children and encouraging them.