“We have received Rs 760 crore for providing soft loans and subsidies to entrepreneurs – contributing to the rapid growth of the AYUSH Sector”, added Mr Kotecha. 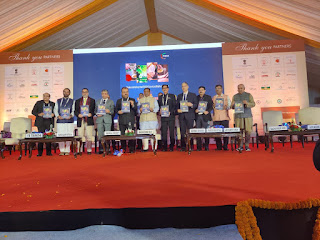 Sri Sri Ravi Shankar, Founder, Art of Living Foundation, in his video address, said, "We have to see that no one should be deprived of the benefits of Ayurveda."

Mr Pramod Kumar Pathak, Additional Secretary, Ministry of AYUSH, Government of India, introduced the theme of the exhibition and conferences at the inauguration ceremony.

Mr Arvind Varchaswi, Co- Chair – FICCI AYUSH Committee & Managing Director- Sri Sri Tattva, while highlighting the importance of AYUSH system in our daily lives and the benefits of Ayurveda and yoga, said, “AYUSH is an integrative system of healthcare and wellness for the world and is time to use India’s 5000 year old wisdom on AYUSH to live a healthy life.”

Mr Anurag Sharma, Chair – FICCI AYUSH Committee & Member of Parliament, Government of India and Director - Shree Baidyanath Ayurved Bhawan Ltd., said that Ayurveda has grown internationally. "The need of the hour is for all of us is to try to make Ayurveda the system of medicine, recognized all around the world," added Mr Sharma.

‘FICCI – F&S Knowledge Paper on “Understanding the AYUSH Services Market in India’ was also released during the event.

The four-day event including exhibition will witness participation of over 250 exhibitors showcasing their products to international delegates and buyers from 60 countries.