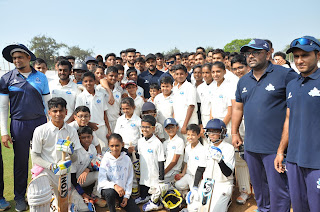 The Mumbai-based Rohit shared his experience with the upcoming cricketers and offered them advice on different aspects of the game.

When a trainee informed him that he could not handle short-pitch bowling and was afraid of being hit, the batting genius promptly told the youngster that there was nothing to get scared about.

“If you are frightened of being hit and getting injured this game or any other sport is not ideal for you. Every cricketer, batsmen or bowlers faces injuries while playing, but you have to learn how to cope with it. Australian batsman Steve Smith was badly hurt and suffered a concussion in the Ashes series in August, but he took a break from the next Test, but came back to resume scoring heavily,” Rohit pointed out. 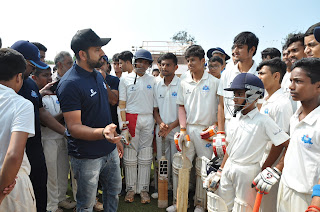 The dashing opener Rohit believes that there is no harm in attempting the big shots or trying to play a flamboyant cover drive. “If the guy is giving you results by playing the big shots, there is nothing wrong in that. Playing shots is not a crime, but, what we need to be careful of is, if the player is repeating the mistakes, then he needs to be told how he should go about it the next time,” Rohit stressed.

“I would encourage a batsman to play shots if they want to, but at the same time they need to understand that they need to produce results. You may score 100 off 50 balls or 200 balls, it doesn't matter, it is still a hundred. I mean if the guy is confident in his skills, I would back that skill. There should not be any restriction on how these young players want to bat. They should be allowed to bat freely, that's how they will produce results,” he further stated.

Besides Mumbai, the academy has training programs conducted in Pune, Hubli, Chennai and Vellore with three more soon to be launched in Vizag, Surat and Bangalore early 2020 and a few more lined up in other parts of India and overseas.