Posted by Alka Swami on February 03, 2020
Will Scarlett Johansson win her first Oscar this year? – Let’s find out on 10th Feb at 5:30 am on Star Movies 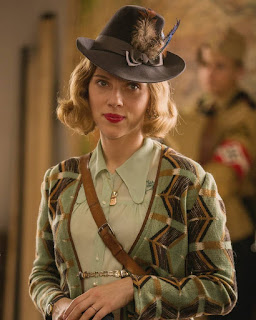 Scarlett Johansson, who has never been nominated for Oscar, has joined the elite club of actors to earn double nominations in the same year. She has been nominated for her brilliant performances in Marriage Story for ‘Best Actress’ and Jojo Rabbit for ‘Best Supporting Actress’. Scarlett Johansson who is the world’s highest-paid actress and has the third highest record of blockbusters to her credit, said that “Marriage Story and Jo Jo Rabbit are two great highlights of my career”.
Speaking about her nominations Scarlett said “I am deeply humbled by the Academy’s recognition of my work which would not have been possible without the support of the incredibly gifted actors and writer/directors that I’ve been so fortunate to collaborate with", and adds that “Working with Noah Baumbach and Taika Waititi, respectively, has given me such deep artistic satisfaction”.
Talking about her role in Marriage story Scarlett said “I think when you see the way that Noah respectfully approaches all of these stories whether you kind of love or hate these people, in different ways it resonates with the audience because there’s no right and wrong in this film. Its able to just be, you know, which is so refreshing. And sometimes you just want to see some reflection of yourself up there and then let it kind of sit and it means different thing to different people”.
And talking about her role in Jojo Rabbit Scarlett Shares “she’s such a beautiful character, I loved Rosie so much, I felt so in love with her when I read the script and I think I felt such an affinity for her. She’s so brave and she has this infinite ability to love and she’s so hopeful in like a very hopeless situation” she goes on to say that “ It was all made with so much love and care and sensitivity and humour and hope”.
Whether Scarlett Johansson win or lose the Oscars, she has already stamped her own mark on the Oscar history by becoming the 12th actor ever to receive two Oscar nominations for acting in the same year.
2019 was an incredible year for Scarlett Johansson. Not only did she star in ‘Avengers Endgame’, which is the highest grossing film of all time, and ‘Black Widow’, her first solo film in the Marvel Cinematic Universe, but she’s also now up for two Academy Awards.
Will this be the year that Scarlett Johansson finally win an Oscar? Find out as the 92nd Annual Academy Awards is set to be aired live on 10th February, Monday morning at 5:30am only on Star Movies and the Oscars goes to!