Posted by Alka Swami on March 09, 2020
Mumbai, 7th March 2020: #MeraFarzHai, a unique and innovative initiative that deals with the menace of sexual harassment was launched at Viviana Mall in partnership with the Thane Police this women’s day. The campaign encourages everyone to make it their responsibility to ensure the safety and security of women across the board and contribute towards ending this menace that plagues society. 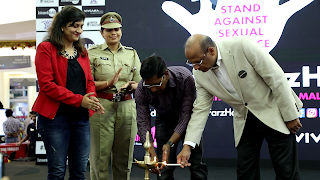 Launched under the aegis of the ‘ExtraordiNaari’ initiative by Viviana Mall this campaign released a film which will be showcased across all theatre screens in the Thane, Kalyan and Dombivli area in approximately 40 theatres and 150 screens. A special self-defense training workshop was also organized at the event conducted by a leading martial arts practitioner who has over 30 years of experience in training women across the armed forces, police and even the BSF. A flash mob was also performed by a leading dance group to support and share the pertinence of the message and the #MeraFarzHai. The mall also announced a special self-defence training program for women which will be conducted in the mall atrium on Women’s Day (Sunday 8th March). The number of expected women to be trained at this session is around 1000 women including shoppers, staff, walk-ins etc.

The mall has set up a pledge booth and organized a unique way of introducing the film to the public where they asked patrons to blindfold themselves and read out a touching poem that aligned their minds to the plight of women and the horrors they go through on a daily basis. The film was screened post this and the impact that it had on the audience was profound. The #MeraFarzHai hashtag was unveiled by Joint Commissioner of Police, Shri. Suresh Kumar Mekhla. 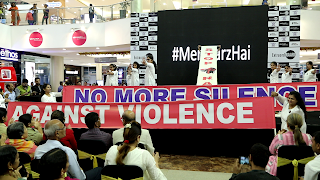 Speaking to us on the launch of this social initiative Ms. Rima Kirtikar, Chief Marketing Officer, Viviana Mall said, “As a responsible corporate we have always introduced programs and campaigns that are aligned to the benefit of society in general and in particular our ExtraordiNaari program has always focused on women and their welfare. This year we believed that the sensitive issue of harassment and abuse needed to be addressed and the pertinent point that came about was that it is always someone else’s problem and issue to be solved. The idea here was to involve society to be more conscious and to take the onus on to themselves to report any incident and get involved where necessary to become a deterrent to incidents. The campaign puts the onus of creating a safer world for women, on each one of us. The film is part of a larger campaign which will be rolled out in the coming weeks, but the maximum communication around this is through the film which is being screed across 40 theatres and 150 screens in the region. We believe that a more inclusive and participative community goes in a long way to create a more secure and safe environment for all.”

Commenting on the event Joint Commissioner of Police Shri. Suresh Kumar Mekhla Said, “It is not only the responsibility of the police but also the entire community to come forward to make a society that is safe for women. We applaud such initiatives that highlight the atrocities and make people aware of their rights and responsibilities towards the community. If we all come together as one and work in harmony with each other, we can ensure that we create a model society for all where crime has no place and women and children can feel safe and secure. We encourage and welcome enthusiastic participation of one and all in this initiative.”

In addition to this, the program will see gender sensitization workshops and training programs being conducted across schools, colleges and even workspaces. Viviana Mall has tied up with associations for Martial Arts training and other self-defense techniques to women/girls across schools, colleges and workspaces. School kids too will be part of this program, starting from 5thStd, where girls will be given the lessons on self-defense and seminars on gender sensitization and sexual harassment will be for boys. Viviana mall will conduct these training programs in schools across thane city and will extend its reach to all schools and institutions over the next few months. 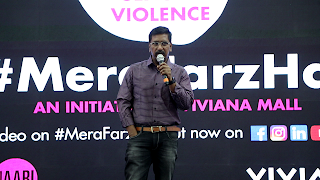 Although #MeraFarzHai began as a campaign to safeguard women against those who violate their rights and space, the DNA of the campaign was in fact, all about encouraging and pushing individuals to take action for every cause possible. The first step of this campaign #MeraFarzHai initiated with making sure each and every one has the contact number for women’s safety helpline, but it soon, encompassed all imperative emergency and helpline numbers. Be it children welfare, ambulance emergency or even fire emergency, the campaign #MeraFarzHai equips each one and all with the armour one needs, to carry out their Farz.

Viviana Mall through its flagship campaign - ‘ExtraordiNAARI’ aims to take up various women centric social causes and aims for the betterment of women in society by creating awareness and a long-lasting impact on society.

In 2018 Viviana Mall launched #STOPACIDSALE campaign where they highlighted unheard and untold stories of acid attack survivors in India. The entire concept was taken a notch ahead, where the acid attack survivors walked the ramped at a leading Fashion Week. Viviana Mall was lauded for its innovative and socially relevant campaign against the sale of Acid aimed at prevention of an ever prevalent social malaise of scarring caused by Acid Attacks at the ICSC Asia Pacific Shopping center awards 2018.

In 2019, the Mall applauded Women on Wheelchair through their campaign #Respectwomenonwheelchair. This campaign was in association with the NINA foundation, which aimed to portray women who have broken through the shackles of disability and achieved success in their respective fields despite facing challenges. Through ExtraordiNAARI Viviana Mall aims to facilitate changes in the society in the coming years.